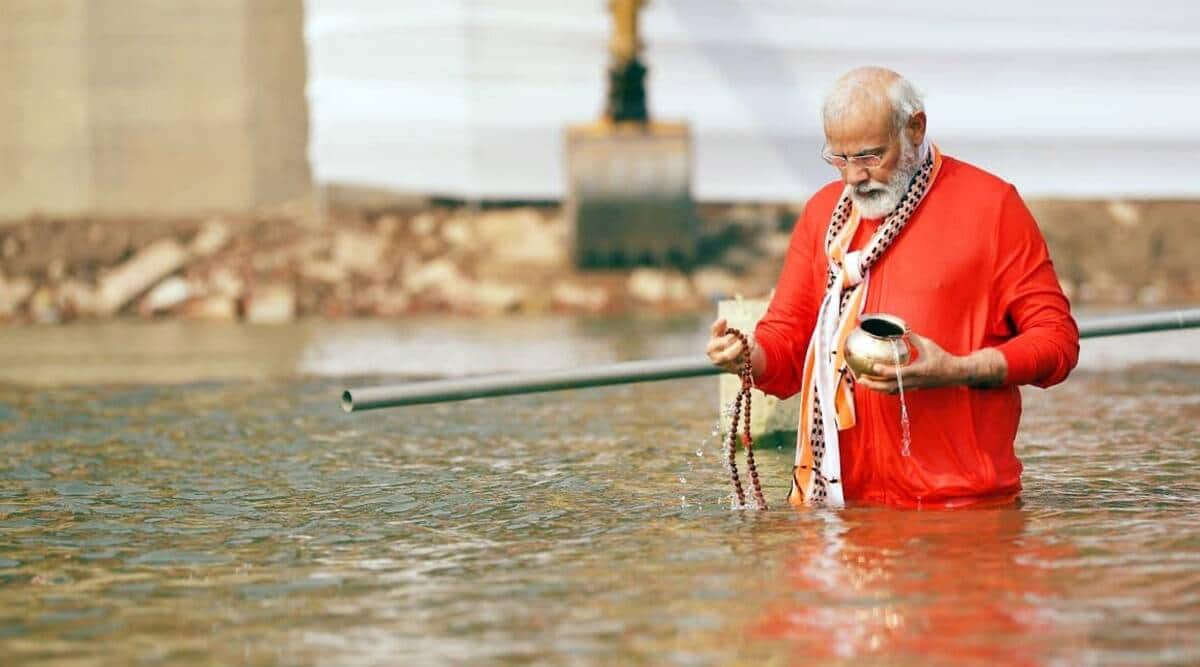 Narendra Modi’s self-portrayal as a religious icon – a devotee of Indian tradition and nationalism – in overtly Hindu terms underscores an interesting political shift. Instead of relying solely on his established image of a vikas purush (development visionary), Modi seems to invoke religious symbolism more directly. At the same time, he takes refuge in conventional Hindutva history to redefine the cultural elements of what is now officially called New India.

Modi’s speech to Banaras is a prime example of this change. Inaugurating the Kashi Vishwanath Dham Corridor, he made two crucial arguments. First, the cultural geography of India must be seen through the prism of the heritage of Hindu temples. He spoke about Guruvayur temple in Kerala, Kanchipuram-Velankanni in Tamil Nadu, Jogulamba Devi temple in Telangana, Belur Math in Bengal, Dwarka in Gujarat and Parshuram Kund in Arunachal Pradesh to claim that these sites represent the authentic faith and culture of India. . The Sri Kartarpur Sahib Corridor, Sarnath and the four Jain Tirthankaras of Kashi were also included in this long list of sacred sites and personalities. However, Islamic religious places of worship are strategically excluded. Modi mentioned Ustad Bismillah Khan’s name in this speech. However, he was able to legitimize the conventional division between “authentic” Indian religions (Hinduism, Sikhism, Buddhism and Jainism) and “foreign foreign” religions (Islam and Christianity).

Modi’s second argument was more direct. Emphasizing the uniqueness of Banaras as a symbol of India’s resistance, Modi said, “… history witnesses Aurangzeb’s atrocities, his terror. He tried to change civilization with the sword. He tried to crush culture with fanaticism. But the soil of this country is different from the rest of the world. Here, if an Aurangzeb arrives, a Shivaji also rises. If a Salar Masud advances, warriors like Raja Suhaldev make him realize the power of our unity.

It should be noted that Modi often avoids making direct comments on controversial historical figures such as Aurangzeb, especially after 2014. Unlike other BJP leaders, Modi remains silent on the Mughal past. However, this time he took a different stance. Without describing the meaning of “our unity”, he succeeded in communicating the conventional Hindutva argument that Indian nationalism could only be defined in a Hindu versus Muslim framework.

These two claims – to see India as a holy land for Hindus and to define Indian history as a battleground of religious conflicts – are not entirely new. However, Modi’s political enthusiasm in the post-Ram temple scenario gave them a whole new meaning.

In my opinion, there are four crucial aspects of this political change. First, it shows that Modi is keen to radically redefine the Hindutva-development configuration. Modi introduced himself as a committed development-oriented leader in 2014 – a champion of the Gujarat model and a practitioner of good governance. This developmentalism was carefully merged with Hindutva during the period 2014-2019.

Hindustva groups at the local level were given maximum freedom to pursue a violent anti-Muslim agenda. The middle leadership of the BJP also made a significant contribution to legitimizing the aggressive Hindutva with the help of the media. Modi, however, maintained a strategic silence. In a way, he gave tacit support to the Hindutva agenda, while emphasizing “”sab ka saath, sab ka vikas”. This silence has helped him carve out political space for himself.

The Covid disaster, the farmers’ movement and the growing economic crisis, it seems, have forced Modi to reverse his previous position. The idea of ​​development is no longer separate from the Hindutva. Instead, development is defined as a building block of it. This is precisely what Modi said in his speech. He argued that India today is not only making temples, but also working hard to achieve comprehensive development. The second aspect of this political shift is Modi’s intensive use of religious iconography. His clothes, long beard, and preference for powerful catwalks to hold public meetings are crucial changes in his public appearance.

Modi, as we know, relies heavily on the theatrical performance policy. He has nurtured a youthful image quite successfully in recent years. However, this youth-friendly, tech-savvy image has reached a saturation point. Religious symbolism is a possible option for him. This gives him a different stature – a patriarch, a saint and a fakir.

This brings us to the third aspect of Modi’s new religious policy. As an ambitious politician, Modi tries to consolidate his position as the ultimate leader within the Hindutva fold. His speech at Ram’s temple makes it clear that he wants Ayodhya’s issue to be commemorated as an achievement of his government. This is exactly what he did in Banaras. He invoked the spiritual and material well-being of people by presenting himself as an altruistic apolitical saint.

Finally, Modi’s direct reference to the Mughal past shows his confidence in Hindutva’s success. He is fully aware that no political party is in a position to oppose Hindutva hegemony. Even non-BJP intellectual-politicians such as Shashi Tharoor and Pavan Varma began to celebrate the resistance of Hindu civilization against medieval Muslim rule. There is no need for Modi to remain silent about the Hindu-Muslim antagonism.

Modi’s new religious image should not be seen entirely as another masterstroke. It should not be reduced to the election of the UP either. On the contrary, this image symbolizes a serious intellectual crisis at the BJP – its failure to come up with a constructive, inclusive and secular political resolution.

This column first appeared in the paper edition on January 6, 2022 under the title “A New Politics of Religion”. The writer is associate professor, CSDS, Delhi