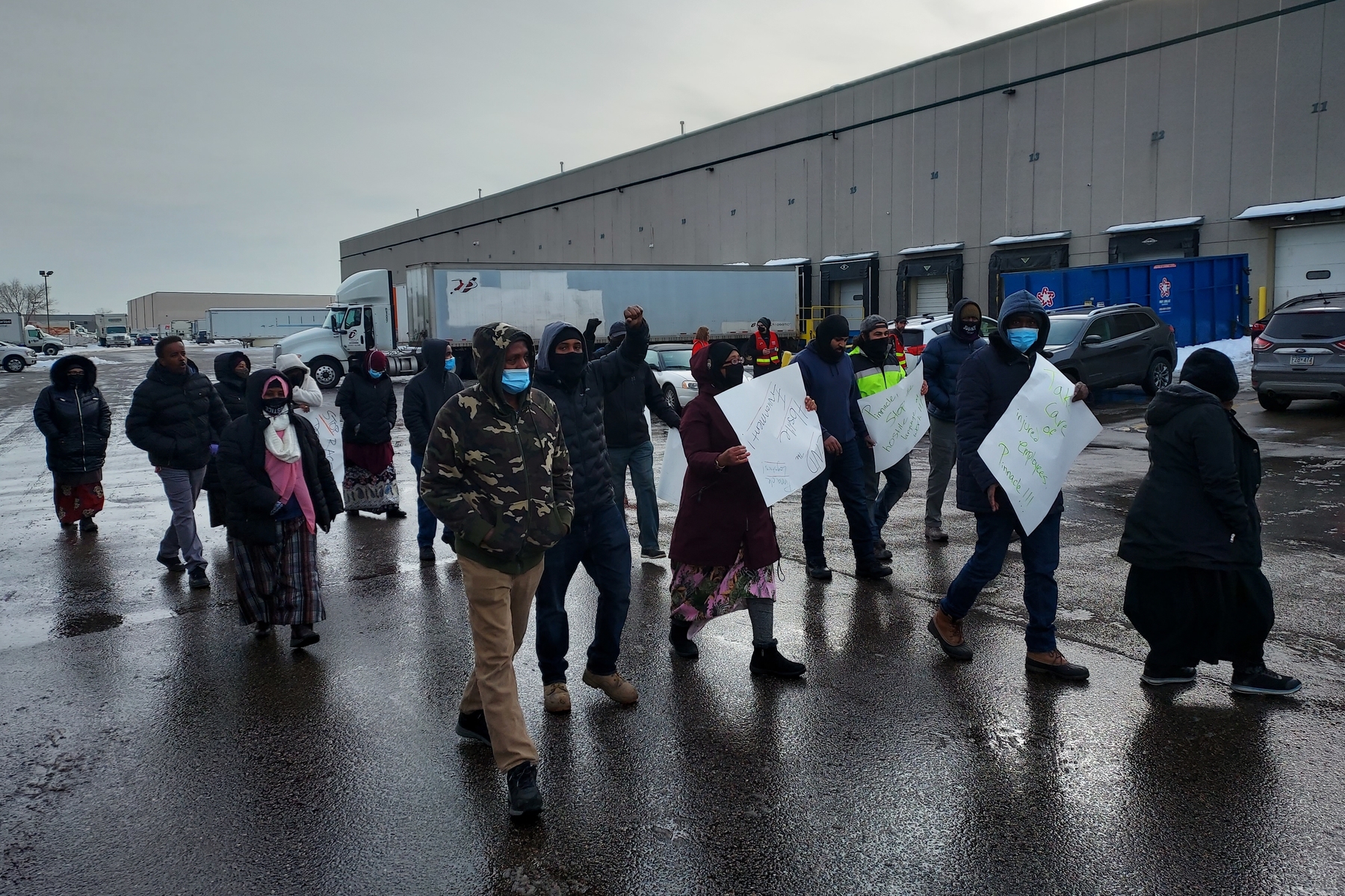 About two dozen employees of Pinnacle Logistics, an Amazon subcontractor, picketed outside the company’s warehouse in Eagan on Tuesday morning instead of reporting for work.

The action came after a similar walkout of around 15 workers on Monday afternoon following an alleged anti-Muslim comment made by a Pinnacle supervisor. Most of the employees who left work on Monday and Tuesday are from East Africa.

Monday’s incident happened as a group of workers were taking a break for one of their five daily prayers. A supervisor confronted them and asked them where they were going. When they said to pray, the supervisor reportedly replied, “That’s bullshit, I’m sick of you all praying all the time.”

The women told their colleagues Barjas Rwaili and Mustafa Karama, both of whom work in handling packages for the company, about the incident. Together, Rwaili, Karama and the women reported the alleged incident to their bosses.

Rwaili said this prompted the director general to speak with the supervisor who allegedly made the comment. Instead of taking the matter seriously, Rwaili said he saw his managing director come out of the meeting laughing. It was at this time that about fifteen employees left their shift, indignant.

“It basically started it all, because there has been a lot of it before,” Rwaili said. “We’ve decided that’s it, we have to go.”

Rwaili, 27, said the incident was just the latest in a series of similar comments from supervisors and managers criticizing Muslims and Somalis. Rwaili alleges that a month ago, he heard his managing director say that he was fed up with hiring Muslim employees “because they are overpaid and slow down his operations”.

As of Tuesday afternoon, the Fort Worth, Texas-based company did not respond to Sahan Journal’s requests for comment.

Pinnacle Logistics employees prepare packages for delivery to the warehouse and Minneapolis-St. Paul International Airport. A typical shift for a warehouse worker lasts around nine hours, while split shifts between the airport and the warehouse are shorter, Karama said. Inside the warehouse, 25 people usually work a shift, Rwaili added.

On Tuesday morning, a group of employees gathered in the parking lot of the Eagan warehouse before the start of the 10:30 am shift. Some gathered quickly fabricated signs with slogans such as “Stop discriminating against us”, “Stop hostile language at work” and “Respect our faith”. They walked to the warehouse entrance, while a smaller group, including Rwaili and Karama, entered to hand deliver a letter to management.

“We have experienced racial and religious discrimination and a hostile workplace, including yesterday’s incident,” read the letter, signed by 20 employees.

The letter called for an end to religious and racial discrimination in the workplace, respect for “our culture and our faith”, the resolution of an alleged incident of sexual harassment and “adequate medical care for women. injured employees “.

After the small group finished speaking with management, they came out and announced an agreement for the picketers to return to work the next day. They quoted management as saying that representatives from the company’s human resources department would be on site Wednesday to investigate the supervisor’s alleged anti-Muslim comment made earlier this week.

Rwaili knows he wants at least one thing to emerge from the investigation: “I want them to be held accountable for what they say.