Anti Habashis DISCOVER THE ART OF PUBLISHING
Home Muslim culture For the BJP, Muslim is not just the message, it is the only message

A shorter version of this article appeared in The Indian cable – a subscriber-only newsletter published by Thread and Ideas Galileo. You can subscribe to India Cable by clicking here.

The Bharatiya Janata party in Gujarat, which first gave us Narendra Modi and Amit Shah, has now delivered a caricature of such depravity and venom that it reminds us of both Nazi propaganda against Jews and the celebratory visuals of lynchings that racists in the American South have used. send themselves in postcards.

Posted on Twitter and Instagram but since deleted by the two social media platforms themselves, the party cartoon shows a group of Muslim men with nooses around their necks, swinging from a rope. “Only the truth will triumph,” says the cartoon in Gujarati. The official Indian state emblem was used (in violation of law) for greater effect.

The cartoon refers to the 38 men sentenced to death by the Magistrate’s Court which heard the case against 77 people accused of planting a series of deadly bombs in Ahmedabad in 2008. The blasts killed 56 people and injured others 200 others. Eleven of the defendants were sentenced to life imprisonment while 28 people were acquitted.

The bombings were an atrocious crime against the people and there is no reason for anyone to show mercy to the perpetrators. Of course, the state will appeal against acquittals while convicts have the right to go to higher courts. And yet, one has to wonder what the BJP — in power in Gujarat and India — wants to convey by publishing such a cartoon.

Is the message simply the party’s vapid way of appreciating that justice has been served for a specific group of individuals? This is in all likelihood the advocacy that its leaders are likely to make. Or are the bearded Muslim men wearing skull caps shown hanging grotesquely a metaphor for something else? Could the BJP in fact signal to its supporters that this is the fate Muslims as a whole will face in the future?

The question is relevant because of the centrality that Muslims as a group occupy in the ideology and propaganda of the BJP and its parent organization, the Rashtriya Swayamsevak Sangh. During an election period, this focus is almost obsessive. Campaign speeches in Uttar Pradesh in particular – by Modi, Shah, UP Chief Minister Adityanath and other party officials – are full of anti-Muslim references, explicit or implicit. By a wonderful coincidence, the verdict and the conviction in a case that dates back to 2008 occurred in the middle of an election. That’s why it should be obvious that in the cartoon spread by the BJP, Muslims are the message.

The reason their cartoon evoked horror is because we’ve seen this kind of singular obsession with a targeted religious minority before, and we know where it leads.

“… [T]The Jew,” Jeffrey Herf, a prominent Nazi propaganda historian, cites Viktor Klemperer as observing, is in every respect the center of the language of the Third Reich, “in fact of its entire vision of the time.”

Klemperer was a scholar who lived in Germany throughout the Nazi era and kept a diary full of observations about the Nazis and their impact. Anti-Semitism for him, says Herf, “was not only a set of prejudices and hatreds but also an explanatory framework of historical events”. Passing by a landmark 1969 essay by EH Gombrich, Herf notes how he wrote that

“Nazi propaganda had created a mythical world by ‘transforming the political universe into a conflict of persons and personifications’ in which a virtuous young Germany valiantly fought against evil schemers, especially the Jews. The Jews were the cement of this myth, first in political battles in Germany and then internationally. It was “this gigantic persecution mania, this paranoid myth which [held] the different streams of German propaganda together. Gombrich concluded that what characterized Nazi propaganda was “less lying than the imposition of a paranoid pattern on world events”.

For the RSS and the BJP, the imposition of a paranoid model on all events is a central facet of their political propaganda. For every threat, real and imagined, the villain is the Muslim, the victim is the Hindu. Non-Muslim opponents are assailed for the sin of “appeasing” this villain. The bicycle used by suicide bombers in Ahmedabad has been turned by Modi into an indictment against the Samajwadi party, whose electoral symbol is the bicycle. Why did they choose this symbol, he asked, suggesting that the support of Muslim voters on which the PS relies is contaminated by terror.

In 2019, Modi said no Hindu can ever be a terrorist, so we can be sure there will never be a cartoon depicting BJP MP Sadhvi Pragya and her associates swinging from a noose . The crime they are accused of committing involved the use of a motorbike rather than a bicycle and happened around the same time as the Ahmedabad explosion. In fact, his trial has not even started. But since terrorism, in the imagination of the BJP, is purely the work of Muslims, this is not seen as a problem.

As terrorism has declined in recent years, the “paranoid pattern” has taken hold elsewhere. In 2020, BJP leaders unleashed vicious “Corona Jihad” propaganda, which blamed Muslims for the pandemic. Then there is the spitting jihad, the ground jihad, the amorous jihad, the mafia, the invaders, the rioters, the infiltrators, the termites. Once the line is drawn from above, the Hindutva ecosystem rushes to produce and distribute the necessary visuals.

“Yesterday and Now” (left) and “Producer-Distributor” (right), cartoons released by Hindutva groups in 2020. (Source: Lakshmi Murthy, “The Contagion of Hate in India”). Here, the Muslim is not content to spread disease, but has allied himself with India’s external enemy, China.

CJ Werleman and others have noted the parallels between the “corona jihad” campaign and Nazi propaganda blaming Jews for typhus, but when we look at visual depictions, including the caricature of Jew and Muslim, the resemblance is even more striking – and frightening. . 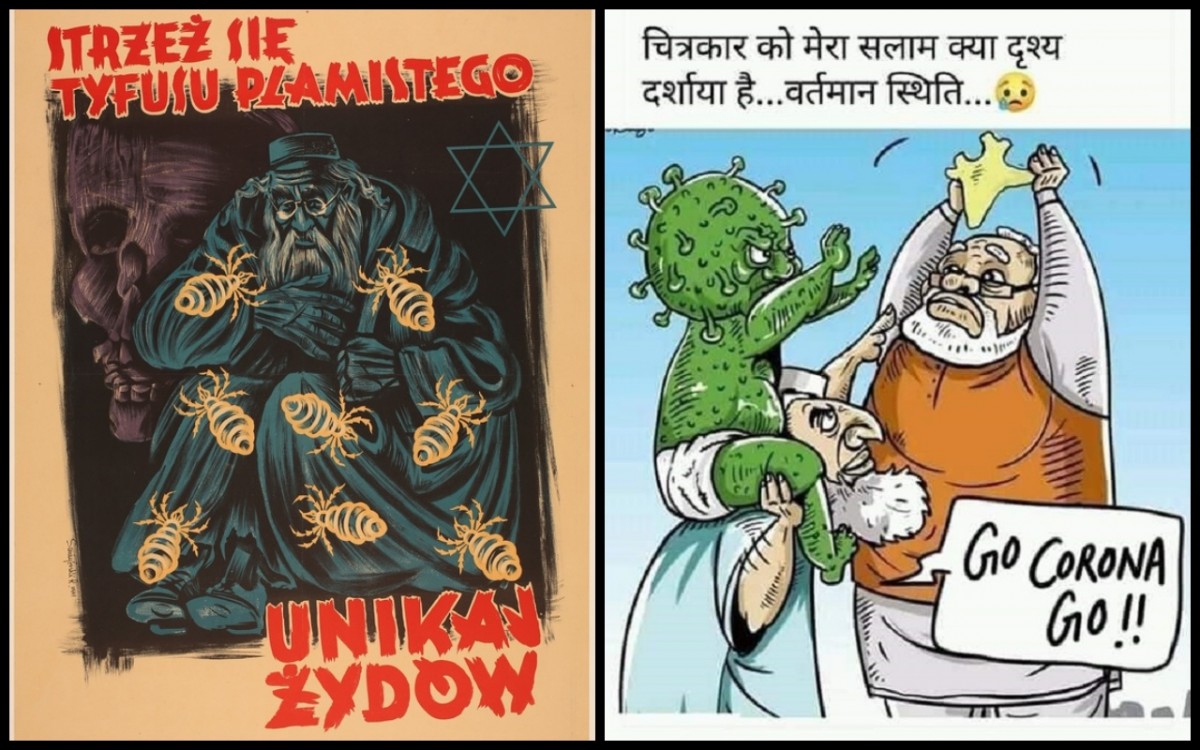 ‘Protect yourself from typhus, avoid the Jews’: a Nazi propaganda poster from occupied Poland in 1941 blaming Jews for the spread of lice. ‘Go Corona Go’ (left), a cartoon released by Hindutva groups in 2020 showing the coronavirus straddling the shoulders of a Muslim, confronting Narendra Modi and India. Source: American Holocaust Museum, performindia.com

What do these Hindutva propaganda visuals tell us, and why should we urgently take note of them instead of dismissing them as “marginal”? For, as Herf tells us in his paraphrase of the historian of fascism George L. Mosse, “the racism of body stereotypes and countertypes” was the catalyst that pushed German nationalism over the edge, from discrimination to ‘mass extermination’.

Of course, the Nazis had a much more developed notion of the ideal body and reviled counterpart than the RSS-BJP – Hindutva fascism draws on different historical and cultural undercurrents from its European counterparts. Nevertheless, the somatic preoccupation of Muslims – their facial hair, their clothing, their diet, their ways of worship – marks them as a group that should be vilified, feared and ultimately put in their place. To quote a verse from the racist lynching postcard from the United States,

‘The Muslim now, by eternal grace,
Must learn to stay in the place of the Muslim’

You can recognize them by their clothes, Modi had said of people who oppose the Citizenship (Amendment) Act. Gujarat’s BJP – a state Modi ruled for 13 years – now wants us to recognize them hanging on a rope.