More than any other state or region in India, Kashmir’s political discourse remains a whirlwind of competing narratives. There is a pan-Indian narrative with many nuances: right-wing (which is dominant right now), centrist, secular, and left-wing. There is a Pakistani narrative with its moderate and extremist variants. And then there are rhetoric within Kashmir: a Kashmiri Muslim narrative and a Kashmir pundit version of reality.

At their extremes, discourses are absolutist but they become more differentiated down the line, refracted by religion, community and politics. These discourses compete, clash and overlap in the daily life of Kashmir. With each story, the frames change: similar events and incidents come to be interpreted differently depending on the politics, ideology, interest group or community to which one belongs.

It is rare that Kashmir is seen for what it is: most articles, stories and books end up becoming participants in some version of Kashmir history. Few rise above speeches and seek to investigate, question and shed light on what is happening. Khem Lata Wakhlu A Kashmiri Century: Portrait of a Society on the Move does not stand out in this respect.

As a critic, too, I am faced with a fault line: A Kashmiri Muslim criticizes a book by a Kashmiri Pandit. It is difficult not to be aware of this at a time when people are first and foremost and, more often than not, exclusively identified and judged by their religious identity. Kashmiri Muslims and Pandits have come to develop different perceptions of their stories and memories, even though they share language, dress, cuisine, culture and, most importantly, genes. It is therefore natural that the account of the last century of Kashmir which we find in Wakhlu’s book clashes in some of its aspects with mine. But then, this way of looking at the book only compromises the integrity of the review.

I will therefore focus first on one aspect which by its very nature transcends politics: for example, the celebration through memories of the lived experience of the life of the Kashmiri Pandits embodied by Rishi Vihar, a sprawling house on the banks of the Jhelum river, home to the wealthy commune of the Kashmiri Pandit family of Dhars. Its rooms echoed with the sound of dozens of inmates celebrating Nav-sheen (fresh snow) each winter. Its entrances, courtyard and interconnected corridors were places of play for young brothers and cousins.

utte at the turn of the 19th century, Rishi Vihar was a multigenerational family home steeped in the tradition of the Kashmiri Pandits, but also geared towards modernity. The household produced officials for the government, which the Kashmiri Pandit community has invariably done over the centuries, serving as employees of successive rulers, from Mughals to Afghans to Dogras. In return, many pundits received land grants from the rulers. This has given the small community, which makes up just over two percent of Kashmir’s population, its weight in society. Pandits ruled governments and carried out government projects on the ground. They taught in schools, and at the dawn of mass communication in Kashmir in the mid-19th century, they were also active in the media. These are irrefutable facts from Kashmir’s history of the past four hundred years, if not more. 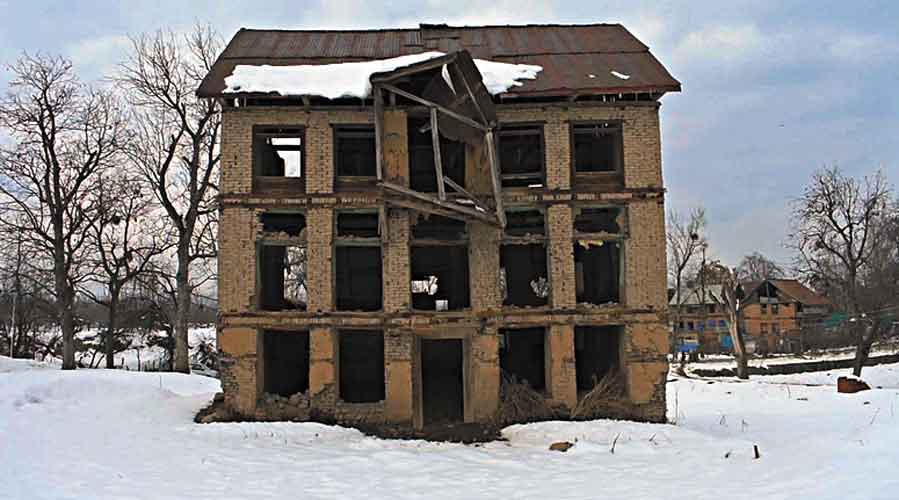 And maybe that’s why when Wakhlu talks about a Kashmiri century in her eponymous book, she is actually talking about a Kashmiri pandit century. The Muslim community – comprising 98% of the population of Kashmir – is hardly involved in this story. It is simply erased from the scene and made peripheral to the account. The conversion of Kashmiris to Islam is said to have occurred in “waves of unspeakable brutality” without any historical evidence being cited.

The history books on Kashmir say that Islam spread to Kashmir in the 14th century by the Sufi saints of Central Asia who built dozens of shrines to their names throughout the region, some of which were from elsewhere frequented by pundits from Kashmir. And if one applies the popular binary of “good and bad Islam”, the strain of faith practiced in Kashmir over the past seven centuries has consistently been called “good”: it is seen as a variant of the Sufi Islam, tinged with Shaivite influences. . But for Wakhlu, the last seven centuries have been â€œthe darkest periodâ€ in Kashmir’s long history.

Muslims make a fleeting appearance in the book, but as Sad-Makkars (charlatans) like Lassa Joo, the Gardener, Hassan Bhat, or “Amma, Momma, Ahada, Nabba”, the subordinate helps a caravan of Maheshwar Nath, a senior official from the irrigation department, who was transferred to Gilgit. They are on the fringes of what is a Kashmiri Pandit story unfolding throughout.

That said, A Kashmiri Century manages to evoke nostalgia for a once serene valley where Kashmir pundits did not live in segregated settlements but in the midst of Muslim neighborhoods. The Dhars were also neighbors of the Peers, a high caste Muslim family: “The two families lived so close to each other that only a common perimeter wall and this one also not very high, separated their houses” . But other than the occasional encounters along the perimeter wall between the children of both families when they were playing in the yard, the Peers don’t make a fuss in A Kashmiri Century.