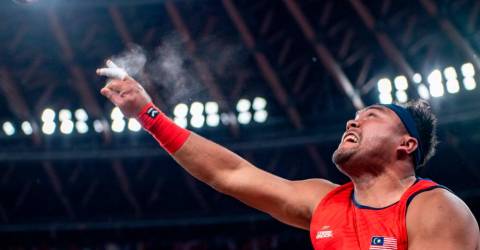 TOKYO: Malaysian netizens have been urged to stop criticizing Ukraine and remain calm about the current situation regarding the country’s contingent at the ongoing Tokyo Paralympic Games.

Head of Mission Datuk Seri Megat D Shahriman Zaharudin reminded the audience to set the best example in order to avoid giving the country a bad image in the eyes of foreigners.

“We are all civilized people and have great respect for others; let’s show a good example.

“Don’t blame other countries, instead we need to improve ourselves to be better human beings. I understand that some Malaysians are angry with the decision, but the most important thing is that we have to move forward, ”he told Bernama.

He said this when asked to comment on the action of Malaysian netizens attacking the social media sites of Ukrainian athletes and the Ukrainian Paralympic Committee following the recent controversial decision in the F20 (intellectual disability) category of the throw. of men’s weight at the Tokyo Paralympic Games.

On Tuesday, August 31, the world sports arena was rocked by a shocking incident in Tokyo after Muhammad Ziyad Zolkefli (pix) was denied the gold in the men’s F20 shot put. His throw from a distance of 17.94 meters (m) was also a new world record for the event.

It was classified as Did Not Start (DNS) following a protest filed by Ukraine, which claimed that Muhammad Ziyad was late to enter the call room.

Ukrainian Maksym Koval was announced as the gold medalist with a throw of 17.34m, breaking Muhammad Ziyad’s world record of 17.29m he set at the 2017 Para-Athletics World Championships in London.

Yesterday, World Para Athletics (WPA) rejected Malaysia’s appeal, but the organizing committee said all complaints and follow-up appeals could be made by writing to the International Paralympic Committee (IPC) and the WPA once the Games are over.

Muhammad Ziyad’s gold medal disqualification was based on World Para Athletics rule 5.5 – “Failure to Report to Call Room” – which states that if athletes are not present in the call hall. call at the appropriate time, as posted in the call room calendar, they will be displayed in the results as DNS (Did Not Start).

Megat D Shahriman said he respects the decision taken by Ukraine because it has the right to protest the result of the shot put, as allowed by the rules of sports competitions.

He also called on all Malaysians to forget the incident and refocus and unite to support the national athletes in their mission to reach the goal of three gold medals at the Tokyo Paralympic Games.

Meanwhile, Megat D Shahriman, who is also the president of the Paralympic Council of Malaysia (PCM), said he respects Australia’s decision to admit his mistake, which led his athlete Todd Hodgetts to be also classified DNS.

According to him, he will leave it to a committee that has been set up to investigate the matter in Tokyo and that he would notify any further development once the Paralympic Games are over.

“Let’s go on and forget what happened, we have more athletes to focus on. I believe we can win more medals here, ”he said.

The Tokyo Paralympic Games will end on Sunday (September 5). Bernama