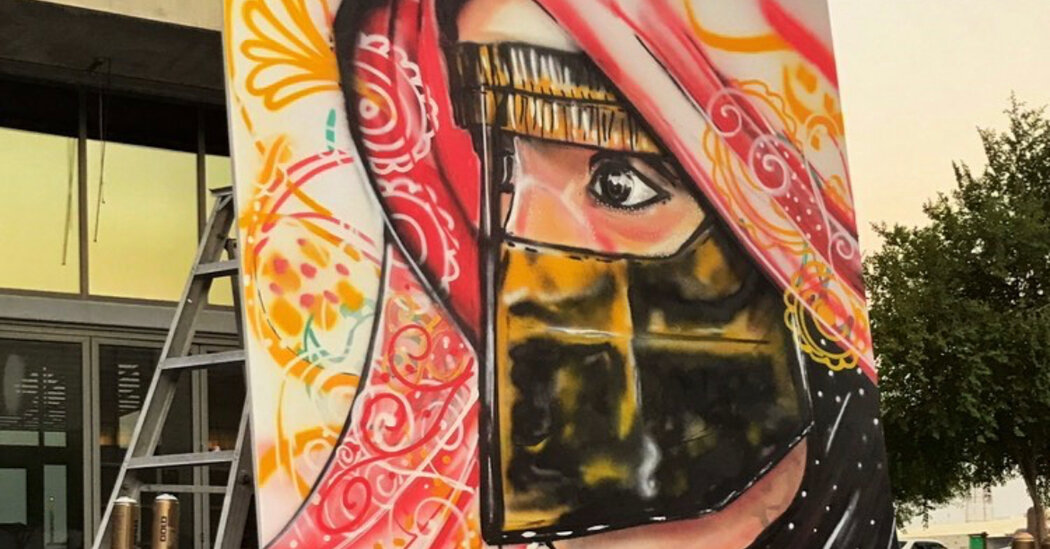 Qatari artist Mubarak al-Malik is known for dozens of murals in his homeland, especially in his hometown, Doha, where he brings strong portraits and vivid colors to buildings that often stand alongside new skyscrapers. sparkling booming city.

Many of these works have a common element that Mr. al-Malik sees as the perfect symbol of his country and culture: and near the Arabian Peninsula.

Now, Mr. al-Malik is bringing this cultural symbol to Miami – and, by chance, it happens when the attention of the art world is drawn to the area for Art Basel Miami Beach.

“With my murals, I want to show Qatari culture and why batoola means mother, home and traditional culture to me,” Mr. al-Malik, 34, said in a recent telephone interview from his time. home in Doha. “Qatar is now very much on the radar of the world. Now is the right time to show the world our culture.

This culture, and the almost insane speed with which Qatar has embraced art and modernity in recent decades, is evident not only in Mr. al-Malik’s trip to Miami, but also in the works of several others. leading Qatari artists. Like him, they had the opportunity to bring their art to the United States as part of Jedariart, a public art initiative. The guest artist program is part of the Qatar-USA Cultural Year 2021.

Jedariart had hoped to be connected to the Art Basel event in Miami Beach, given its importance and high attendance. Other Jedariart artists on this year’s program were: Fatima al-Sharshani, who painted in Portland, Oregon; Mubarak al-Thani, in San Francisco; Nada Khozestani, in Jersey City, NJ; and Muna al-Bader, in Houston.

But Mr. al-Malik will have his work in the spotlight, in the middle of Wynwood, a former warehouse district that has now become a hub of art and culture. And his work would stay there for a full year alongside other neighborhood murals known as a magnet for muralists.

Mr. al-Malik said he intended to paint in the same style – and with the same subject. Most of his murals (he completed around 40) were done on crumbling ruins in the Qatari desert, as well as on low-slung and often abandoned buildings in Doha and other cities.

Many of them represent the batoola in a colorful and almost cartoonish way. It’s a whimsical way for Mr. al-Malik to portray the rich history of the Bedouin women of this Persian Gulf peninsula – a story that many outside the region may not know much about.

Much of Mr. al-Malik’s affection for the headgear stems from his relationships with members of his family, especially his grandmother, who has worn batoolas for decades. Now 80, she has been the inspiration for much of his work, he said.

He acknowledges that the covers are often misunderstood outside of the Muslim world. But for him, the batoola is the perfect vehicle for celebrating Qatari life at home and abroad, and showing its complexity, from rustic to contemporary. Traditional and a little mysterious, it is now a fashion accessory for many modern women in this country of almost dizzying wealth.

“In my artwork, I try to show my culture, and if someone asks about something they don’t understand, I’ll explain it,” he said. “I show them why I love my culture and my country.”

Abdulrahman al-Ishaq, director of public art at Qatar Museums, a consortium of museums across the small country, said Mr. al-Malik had chosen an appropriate symbol.

“For the people of the Gulf, the batoola is a symbol of maternal compassion, care and generosity,” he said. “Non-Muslims or those unfamiliar with our regional traditions see it through the framework of political agendas, which is unfortunate. Mubarak probes the curiosity of viewers, asks them to question the face covering and then to understand it beyond its superficial stereotype.

The origin of batoola is not clear, but it has been worn for several centuries to express modesty and sometimes marital status in Islam, as well as to protect against the wind and deflect the harsh desert sun. Usually made from goatskin or heavy fabric, it is painted in gold or silver, giving it a shiny texture that is often mistaken for metal.

The shape and design of batoolas vary widely from country to country, including a predominantly full face cover with a cage-like design and one that covers the eyebrows and runs down the center of the nose, resembling a hawk beak.

For Mr. al-Malik, the many shapes and sizes provide him with a versatile image to incorporate into his art, as well as a variety of faces that he often depicts up close and large in his murals.

“In my travels over the years, I have seen the art of graffiti and how it can express a culture, and I asked myself, ‘Why don’t we have this in Qatar’,” a- he declared. “Street art was not very important in Doha until about 15 years ago, but now it’s everywhere. It’s not just in galleries and museums anymore.

Mr. al-Malik also works in painting and sculpture and studied art at the Youth Art Center in Doha. He has represented Qatar in several international exhibitions and has also painted murals in Rio de Janeiro, Moscow, London and Bahrain.

His mural during Art Basel Miami Beach, which still has no title, will be about 20 feet high by 40 feet wide, he said. He plans to finish it in about eight days from Wednesday, although some of his similar-sized murals only took four to five days.