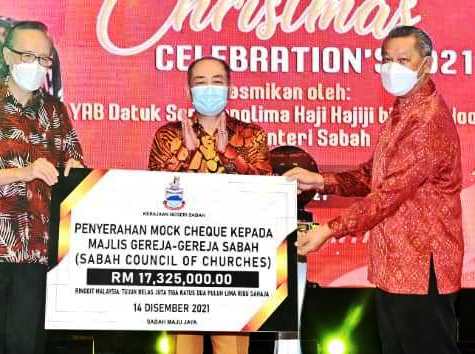 Second Finance Minister Datuk Seri Panglima Masidi Manjun (left) hands over a fake check to the president of the Sabah Council of Churches, Datuk Jerry Dusing, in the presence of Hajiji.

At the same time, assistance to religious bodies, namely churches, temples and shrines, amounted to a total of 24.9 million ringgit.

“As a caring and just government, we will continue to provide assistance and grants to non-Muslim schools and religious organizations across the state. The help is also a sign and proof that the state government of GRS is serious and sincere in helping all walks of life, regardless of race and religion, ”he said at the celebration ceremony. 2021 Kota Kinabalu Christmas Party hosted by Kota Kinabalu City Hall (DBKK) and Sabah Council of Churches in Padang Merdeka on Wednesday evening.

Hajiji said the state government is committed to ensuring that unity, racial harmony and strong religious tolerance in the state continue to endure.

According to him, any action that could affect the unity of the people and the stability of the government should be avoided to ensure that the Sabah Maju Jaya (SMJ) roadmap development program is carried out in order to effectively improve the economy and stimulate development and progress in the state.

The state government, he stressed, always supports the organization of festivals, carnivals and programs that lead to the strengthening of unity among people of various races and religions in the state.

“The organization of the Christmas festival can further strengthen the spirit of unity, tolerance and mutual respect among the people of Sabah of various races, ethnicities and religions.

“Indeed, this kind of spirit has been practiced for a long time in Sabah and it also conforms to the concept of Keluarga Malaysia (Malaysian family) introduced by the Prime Minister, Datuk Seri Ismail Sabri Yaakob,” he added.

Hajiji also called on the people to continue working together to ensure that social prosperity can be maintained and enhanced for the common well-being as well as for the benefit of all.

He said that the cooperation and support of the people will contribute to the success of all policies and programs that the government is implementing under the WJS roadmap development plan.

Referring to the Christmas festivities that will soon be celebrated by Christians, he said it is an important and sacred event celebrating the birth of Jesus.

“Christmas is a time of reflection and gratitude. It is also a time to remember those who are less fortunate than us, who are going through difficult times because of this pandemic. Let us remember them together in prayers and help together as much as we can, ”he added.